What’s your favorite dog-friendly store? Now that Barli is done with his therapy dog training class, I’m working to get him out and into stores as much as possible to work on his skills…

One of my dreams is hunt mule deer in the West. I don’t care where in the West. I just want to go out on into that big country, wander around the rocks and cliffs and sage brush, climb out onto a high vista, and glass the scenery for antlers.

I am from the land of white-tails. White-tails are the ultimate habitat generalists, and in “settling” and “civilizing” these Eastern lands, we have create a paradise for them. They can wander the forest devouring acorn after acorn, and they can grow fat and glossy in the fields of soybeans and corn.

The mule deer is a different animal. It migrates from higher elevations to lower ones. It likes much more open forests and grasslands and sagebrush steppes.

Current taxonomy says that the various forms of mule deer and the two subspecies of black-tailed deer represent a single species, but the black-tails are creatures of the Pacific Coast forests. They are different entity in my mind, though I’m sure the deer exchange genes where one form’s range runs into another without any consideration of human classification.

They are beings of a more specific landscape, a landscape that is under threat in part because oil and gas development, housing speculation, and overgrazing by livestock are taking their toll. The spread of cheatgrass, which grows into lovely fire tinder, is also to blame. The fires that spread from its stalks wipe out the sagebrush, which the mule deer rely upon to feed them through the winter.

So the white-tail basks in the glory that is our civilization, as the mule deer continues to retreat and withdraw from it. And in this, I find their true appeal.

I hope that when I will get a chance go West on a mule deer hunt before it is too late. I can see a time when the deer will become so hard-pressed that hunting opportunities will be curtailed, even abolished. I hope that we will be wise in our understanding what is happening to these deer before they lose the range and forage on which they so clearly depend.

To hunt mule deer is to go nearer to the wilderness, perhaps even into it.  It is an odd little romantic dream of mine at which I’m sure some Westerners will laugh.

But these deer still exist in the sage and rocks and grasses. They are the setting sun, casting away beyond the Western horizon, beckoning me across the continent to cross the prairies and the mountains.

And someday, I hope to. Before it’s too late.

National Parks On My Mind 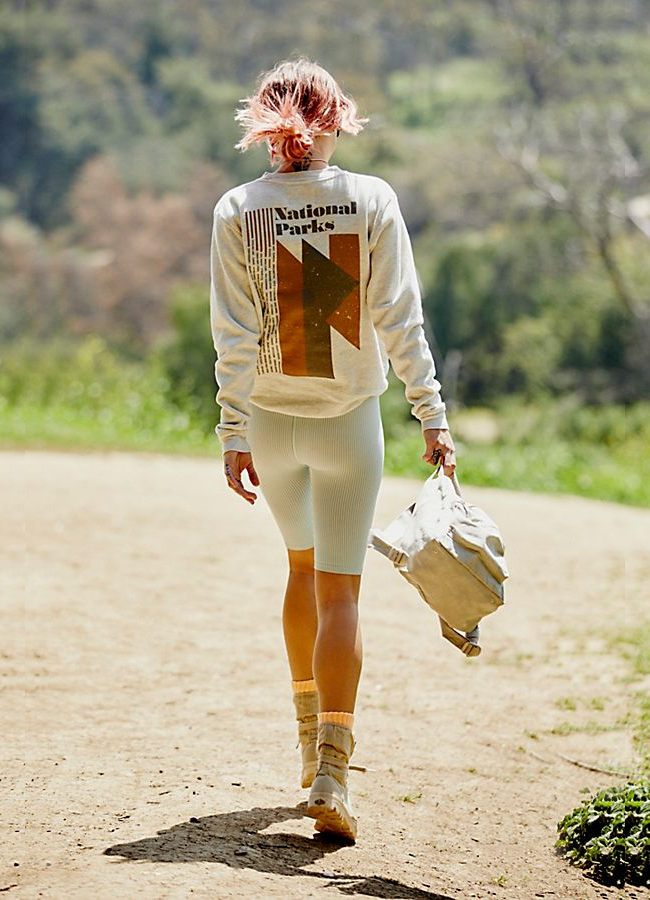 When I was in my twenties, much of my summers were spent in a 1978 Southwind RV, traveling the U.S.. (Okay, so a lot of that time was also spent on the side of the road attempting to fix the vehicle, but that was, um, part of the adventure or something.) And while there were lots of random stops to visit friends and various attractions, most of the destinations were music festivals (where I vended the eco-friendly clothing line I owned at the time) or National Parks.

It’s been a few years now since I’ve last officially been in a National Park, but I daydream of them often (especially my favorites: Yellowstone, Yosemite, Rocky Mountain, and Redwood). And I can’t wait to take my kids on a tour of them on our own summer adventure once they’re a little older.

A few days ago, I stumbled upon this new collection of eco-conscious clothing from Free People in partnership with the National Park Foundation, and was instantly smitten. And no, this isn’t sponsored; I just loved them all too much not to share. Whether it’s the nostalgic aspect of seeing them or the fact that I’m drawn to the style (or both), they make me want to put on one of the pieces and hop on the next RV I see headed west. This time I think I’ll opt for a slightly newer model though…

What is your favorite National Park you’ve visited?

Anyone else have an indoor doghouse? Seems like it would be much more comfortable when your husband is being punished! I do have one question: What’s with having a door on it? Can the dog push it open him- or herself? Until next time, Good day, and good dog!

Of coyotes, wolves, dogs, and men

Humans and the various canids belonging to gray wolf species complex possess the most complex relationship of any two beings currently living on this earth.  At one point, they are our cherished companions, often closer to us than we ever could be with other people, and on another point, they are the reviled predators that might take a child in the night.

We have clearly defined relationships with other predators. Leopards and cougars, well, we might hunt them for sport or photograph them in the wild. But we never become closely aligned with them, except for those eccentrics who dare to keep such dangerous predators as pets.

People living in the Eurasian Pleistocene brought some wolves into their societies.  Wolves and humans should have been competitors. We should have had the same relationship with each other as spotted hyenas and lions do in Africa now.  But at some point, humans allowed wolves in.

Raymond Pierotti and Brandy Fogg demonstrate that many humans throughout the world have had some kind of relationship with wolves. In some cases, it is or was a hunting symbiosis. In others, they were totemic animals.

In their work, Pierotti and Fogg contend that the relationship between humans and wolves broke down with the rise of Christianity in the West. I don’t think that’s when it broke down. It started to become complex when humans began to herd sheep and goats.

In Kazakhstan, wolves are hunted and revered at the same time. The Kazakh people herd  livestock, so they must always worry about wolf predation. Stephen Bodio documents this complex understanding of wolves in his The Hounds of Heaven.

“They hunt them, kill them, chase them with hounds and even eagles, take puppies and rear them live, identify with them, make war on them, and claim descent from them,” writes Bodio. This description sort of fits modern humanity’s entire relationship with this gray wolf complex. We pretty much have done and continue do almost all of these things.

Wolves, coyotes, and dingoes have killed people. So have domestic dogs. In the French countryside, wolf hunts were considered a necessity to protect human life, largely because has the longest and best documented history of wolves hunting people. The dispossession of rural peasants and the depletion of game in the forests created conditions where wolves would consider humans easy prey.  Lots of European countries have similar stories. And when Europeans came to North America, they knew about the dangerous nature of wolves, even if they had never even seen one themselves.

Humans have declared war on wolves in Eurasia and in North America. The wolf is extirpated from much of its former range in Europe. They live only over a limited range in the lower 48 of the United States.

Man fought the coyote with the same venom and lead he threw at the wolf. The coyote’s flexible biology and social behavior meant that all that effort would come for naught.  The coyotes got slaughtered, but they rebounded. And then some. And the excess coyote pups found new habitat opened up with big ol’ wolves gone, and they have conquered a continent, while we continue our flinging of lead and setting of traps.

And in the modern era, where fewer and fewer Westerners are having children, the dog has come to replace the child in the household. Billions of dollars are spent on dog accessories and food in the West.  Large sectors of our agriculture are ultimately being used to feed our sacred creatures.

A vast cultural divide has come to the fore as humans realize that wolves and coyotes are the dog’s wild kin. Wolves have become avatars for wilderness and conservation, and coyotes have become the wolves you might see out your front window.

Millions of Americans want to see the wolf and the coyote protected in some way. Dogs of nature, that’s the way they see them.

The rancher and the big game hunter see both as robbers taking away a bit of their livelihood. Humans are lions. The canids are the spotted hyenas. And their only natural state is at enmity.

Mankind’s relationship to these beings is so strangely complex. It greatly mirrors our relationship towards each other. We can be loving and generous with members of our own species. We can also be racist and bigoted and hateful. We can make death camps as easily as we can make functioning welfare states.

And these animals relationships with each other are just as complex. Wolves usually kill dogs and coyotes they find roaming their territories. But sometimes, they don’t. Sometimes, they become friends, even mates.  Hounds can be trained to run down a coyote, but sometimes, the coyote and the dog become lovers in the forest.

Social, opportunistic predators that exist at this level of success are going to be a series of contradictions. Dogs, wolves, and coyotes certainly are. And so are we.

It is what we both do. And always will.

Ya’ gotta hate it when your parents find your stash! Until next time, Good day, and good dog! 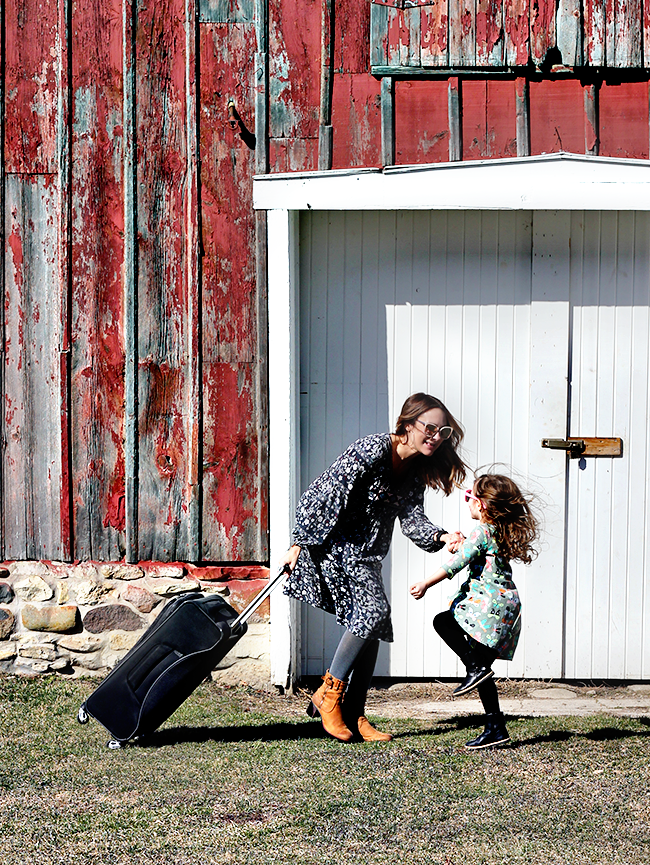 I usually take a week off from the blog during our annual trip to Arizona in April, but since it’s looking like that trip won’t work out this year (for several reasons), I’ve decided to push my blog break up to this and part of next week. It’s the kids’ spring break from preschool and activities, so we surprised them yesterday with a mini trip into the city for museums and an overnight staycation. Robbie has a few days home from the road, and it’s been so long since we’ve been able to just spend time together as a family. I’ll still be posting over on Instagram (especially to my IG Stories!) and Facebook, but I’ll be saving new content for here on the blog until next week.

Speaking of the blog and Instagram, be honest with me – do you guys still read blogs? There has obviously been a pretty massive shift over the past few years from blogs to social media, and these days, the vast majority of audience engagement and traffic happens on our Instagram. We still have steady traffic to the blog, and I actually enjoy writing blog pieces more than anything else, so we’re not going anywhere – but it is always a bit of a struggle, from a business and personal perspective, to determine how to divide up time and content. I admittedly spend more time on Instagram than I do reading blogs, but I do still read them, and really enjoy it. And Instagram can be so challenging, so I am always crossing my fingers there will be a shift back to blogging. I’m interested in hearing your take.

Enjoy the last week of March, and I’ll see you in a week!

China May Have Cloned a Police Dog

According to state-run news agency Xinhua, China has successfully cloned a Kunming wolfdog (similar to a German Shepherd) using the skin cells of a seven-year-old female named Huahuangma, a working police dog. Here’s the English translation of the article from Xinhua: KUNMING, March 25 (Xinhua) — A cloned dog, believed to be the first of […]