Happy Independence Day from all of us at doggies.com and breeders.net

Which Shelter Pet Should PawZaar Sponsor Next?

We need your help! It’s time to sponsor a new shelter dog or cat because Ryder, whose kennel was being sponsored by PawZaar, has been adopted!! We’re so excited for this little fellow who…

Arctic fox walks more than 2,000 miles across the sea ice from Svalbard to Ellesmere Island

The Guardian reports that an arctic fox has been documented walking 2,000 miles across the sea ice from Spitsbergen in the Svalbard Archipelago to Canada’s Ellesmere Island.

The vixen, a blue phase arctic fox, was collared with a tracking device on Spitsbergen. The Norwegian Polar Institute then followed her travels for the next 76 days. She wandered across the sea ice to Greenland, probably scavenging polar bear kills and catching sea birds. She then wandered across northern Greenland, eventually the sea ice again to settled on Ellesmere.

She traveled an average of 46.3 km per day, which is a little less than 29 miles day. On one day, she traveled  155 km or 96 miles across the ice sheet in Greenland.

Arctic foxes are significantly smaller than red foxes, which kill them where their ranges overlap.  The two species have hybridized in captivity, but the offspring are sterile. Arctic foxes are most closely related to the kit and swift foxes of North America, and they probably could produce fertile hybrids with them if they were ever given the opportunity.

Arctic foxes are not extremely dependent upon sea ice for survival, but the sea ice is useful for augmenting their diets in the winter, when they can follow polar bears.

Because it is unlikely that this fox’s journey is but a fluke, sea ice has been essential in retaining gene flow in the species across northern Eurasia and North America. More research must be performed on the genetics of this species, but it would surprise me if there wasn’t at least some gene flow across the arctic.

Arctic foxes are about the size of a toy dog, averaging 6-7 pounds in weight, but they are so well-adapted to long-distance travel that they can make such amazing journeys.

Helping Both Ends of the Leash

Shout out to Paws of War, an organization dedicated to training and placing shelter dogs to serve and provide independence to our U.S. military veterans that suffer from the emotional effects of war. In turn, each veteran can experience the therapeutic and unconditional love only a companion animal can bring. Their programs include: War Torn … END_OF_DOCUMENT_TOKEN_TO_BE_REPLACED

In our age of digital everything, parents are often desperate for ideas for activities that will tear their kids’ attention away from their electronics. One great option may be as close as the…

Check out the newest employee at Redbud Hardware in Buchanan, Michigan. So cute! Until next time, Good day, and good dog!

Dare is making herself at at home

So Dare arrived Monday evening. Quest’s breeder dropped her off, along with the Brown Puppy himself, who had been up in New York State winning a few more points towards his AKC championship.

She is a fire-cracker of a pup. She doesn’t scream in her crate, and she eliminates as soon as her feet hit the ground.  She’s not going to be tough to house train at all.

She is also quite interactive. She already looking me in the eye when I talk to her, and she’s also talking back with her cute little German shepherd moans.

She and Quest are getting along very well. He never really has any problem with little puppies, and he generally likes other dogs. So those two won’t be much of a problem.

Dare has that German shepherd look in her eyes. It’s hard to describe, but it’s one of their hallmarks. They have deep piercing eyes that fully portray their intelligence.

I think she will be an awesome dog. She’s already a super puppy.

And yes, I must fully admit that I am no longer a golden retriever person. They are good dogs, but they don’t do it for me the way a German shepherd can.

I am so fortunate to know so many good people in the breed in this country. I want to thank Frank De Bem of Kysarah Shepherds in New Hampshire for giving us this wonderful opportunity, and I want to thank Brianna Burkhart, Pamela Martin, and Anya Dobratz for transporting her across the Northeast to get her out here.

So I am happy with this little black and tan pup.  I know that I am in the right breed community, and these dogs are so awesome.

A wild narluga has been identified

In the 1980s, an Inuit subsistence hunter in Greenland killed three gray whales that looked suspiciously like belugas at first. However, they were oddly gray. The fins resembled a beluga’s, while the tail looked like that of a narwhal.

The hunter kept one of the skulls, eventually donating it to science, where became the property of the Greenland Fisheries Research Institute. A scientist working for that institute, Mads Peter Heide-Jørgensen,hypothesized that this skull came from a hybrid between a narwhal and a beluga.

It was only today that a study was released in the journal Nature that revealed that this whale was indeed a hybrid. The DNA analysis revealed that male beluga mated with a female narwhal to produce the creature.

The skull was quite strange. Belugas have 40 homodont teeth. Narwhals are toothless, except males. The males have one really long canine tooth that sticks out as a tusk. Sometimes, they have two, but most have only one true tooth. It is spiraled like what is expected form the mythical unicorn. They do have only a few vestigial teeth.

The hybrid had 18 teeth, many of which were pointed out horizontally and spiraled like the vestigial teeth of the narwhal.

Isotopic analysis also revealed that the hybrid had a different diet from either parent species, both of which catch fish or squid in the open water. The beluga hunts fish at depths of up to 500 meters, while the narwhal hunts fish or squid at depths exceeding 800 meters. The isotopic analysis revealed that the narluga was eating mostly benthic prey, which means it was eating mostly shellfish from the sea floor.

So this study raises so many questions. Analysis of the narwhal genome revealed that gene flow between the two species stopped between 1.25 and 1.65 million years ago. The initial split happened around 4 million years ago, and that study thought that an viable hybrids would be unable to reproduce. However, the authors of the study cautioned that a larger sample size of individual narwhal and beluga genomes from across their range might reveal more recent dates on when gene flow stopped (if it did at all).

So it is not entirely clear that this hybrid would have been sterile, but we also have no further evidence of hybrids anywhere else.  It is quite possible that these hybrids could be fertile, and if they are, climate change could cause the eventual genetic extinction of the narwhal.

The morphology and feeding behavior this odd whale might point to the origins of the narwhal. Perhaps the ancestral narwhal was a benthic feeding whale that later lost its teeth to become a whale that hunts squid and fish at great depths with an almost toothless mouth.

Having teeth like the hybrid is a great adaptation for this particular diet, because the forward pointing teeth can poke around and dislodge shellfish more easily.

If these hybrids are fertile, then one could see the eventual development of a hybrid whale species that has its own niche as a benthic feeder in the arctic.

It is an amazing find, and chances are there will be more discovered. Further, as scientists examine genomes from belugas and narwhals from a wide geographic distribution, we might see evidence of some hybridization.

Hybridization could also increase genetic diversity in narwhals, but if these hybrids must eat a fundamentally different diet than narwhals do, it might become difficult for these hybrids to add their genes to narwhal populations. They just cannot hang out for extensive periods of time, before they have to split off and engage in divergent feeding behavior.

So this discovery does generate lots of speculation and raises several important questions that need to be addressed. 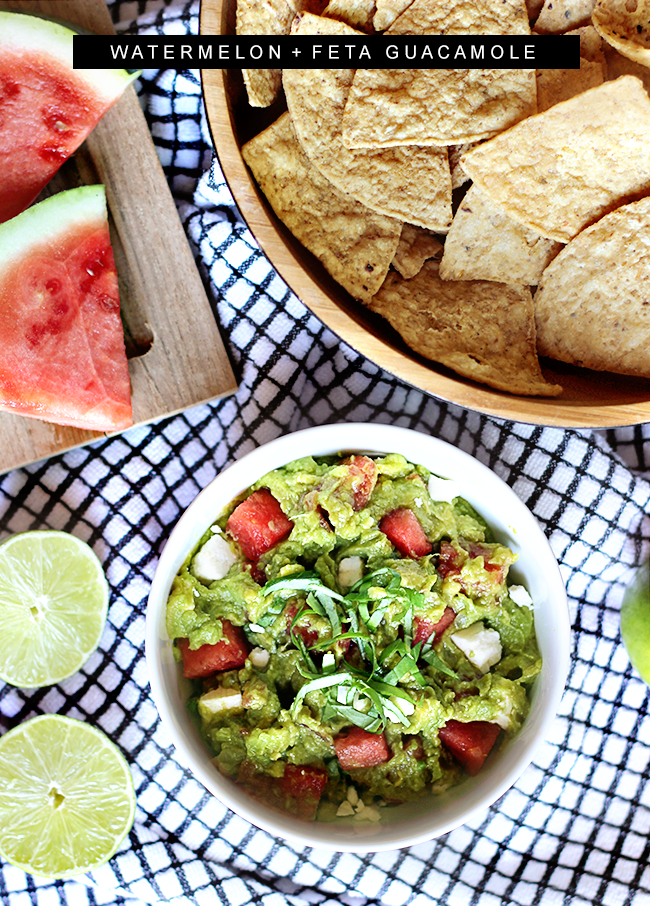 I initially shared this recipe here a couple of years ago, but it has become such a summertime staple in our house, and I’ve made some subtle changes to it along the way, so I decided to share this updated version. This guac is simple to make and incredibly refreshing. It’s become one of my go-tos for both everyday snacking and to serve at summer gatherings. 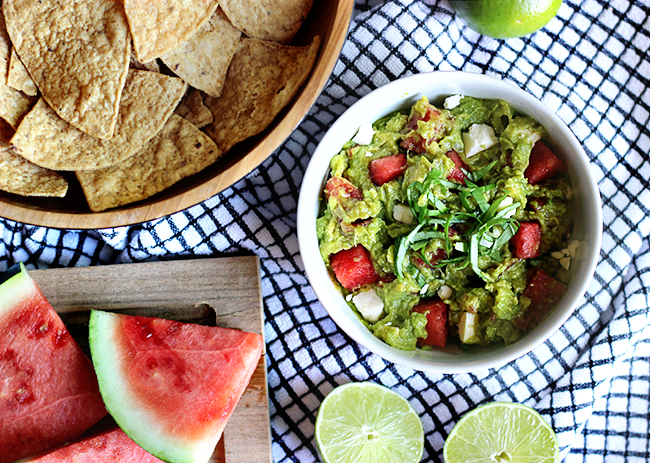 Cut avocados in half, remove pits and skin, and swash with a fork or masher in a medium size bowl to desired consistency. Cut and cube watermelon. Slice the basil into strips. Combine the cubed watermelon, about 3/4 of the basil strips, and the crumbled feta with the mashed avocado. Squeeze half a lime over the top, add a little salt and pepper, top with the remaining basil, and serve! 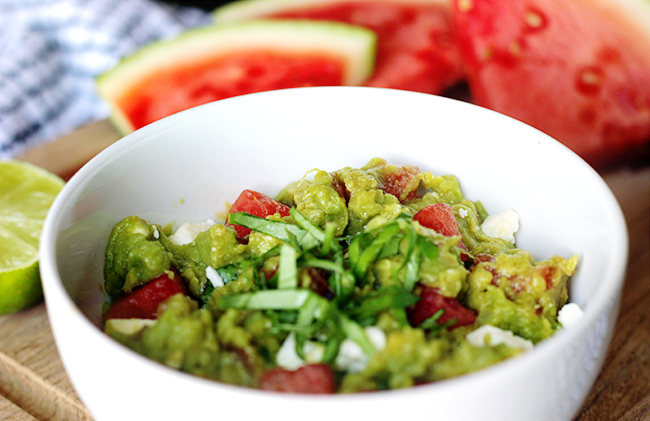 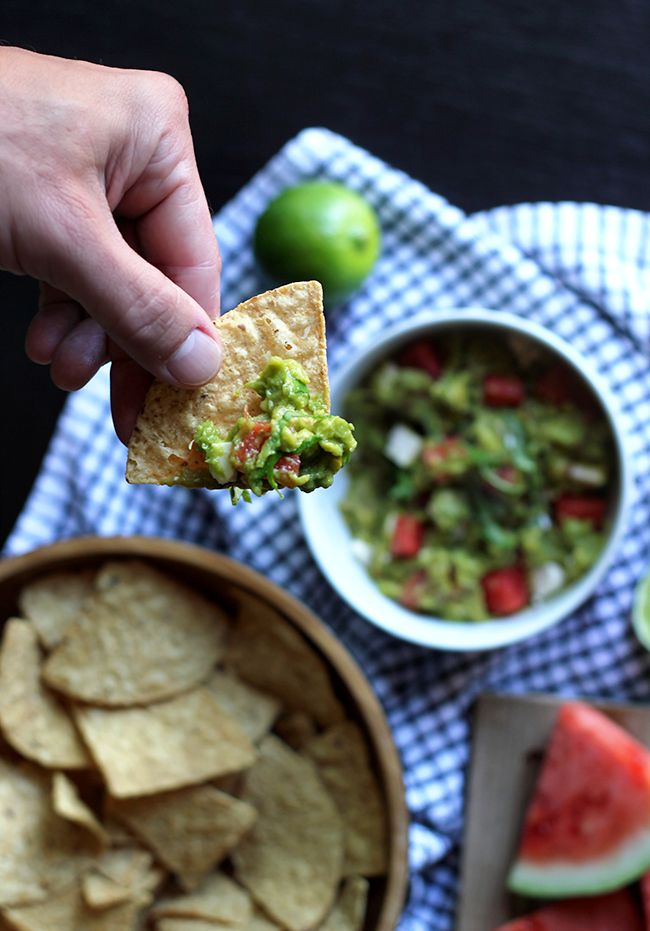 If you try this, let me know what you think! Do you have a favorite guac recipe for summer?