Check the Chip Day is Coming!

August 15th is the day all pet families are encouraged to check their microchips to make sure all information is up to date.A microchip can mean the difference between reuniting with your lost or stolen pet and never seeing them again. Startlingly enough, only 58% of pets’ microchips are linked to the correct owner information. […]

It began with jackals

Canis cedazoensis was an early species of the wolf-coyote-jackal tribe. It lived what is now the American Southwest and Northern Mexico until 300,000 years ago. It probably scavenged kills of bigger predators and lifted off the fawns of the various species of pronghorn.

Conventionally, we believed that the lineage from which this jackal-like canid gave rise to the wolf, the coyote, and the golden jackal. We based these assessments on comparative morphology from fossil and subfossil remains, and it all made sense.

These jackal-like forms entered Eurasia and Africa. They gave rise to the Xenocyon, the first wolf-like canid to evolve of this lineage.  The Xenocyon gave rise to the dhole and the African wild dog. Then the actual wolves evolved in Eurasia, and they walked back into North America to found the Armbruster’s wolf and the Dire wolf. They spread to South America, and endemic North American wolves, Canis edwardii and the putative red wolf evolved out of an unrelated jackal-like line.

The coyote descended from some sort of jackal-like canid in North America and a least a million years of evolution separates the coyote from the modern gray wolf.

The most recent study that examined full genomes of various wolves, dogs, and coyotes revealed that the separation between coyotes and gray wolves happened only 50,000 years ago. This finding pretty much destroys all this thinking.

What we’ve missed that just as the Xenocyon and the dhole and African wild dog have evolved into wolf-like forms in parallel to actual wolves, the real story of Canis is that there has been a constant tension between selection for wolf-like traits and jackal-like traits. The coyote is a wolf that has re-adapted itself to the jackal-like form. To become a jackal is to become a generalist again. To evolve towards the wolf is become an apex predator and be forced to hunt for large game to survive.

What we know from the fossil record is the story of wolves and dogs and coyotes and their kin is that it began with “jackals.”  Paleontology says that North America is where this story got started, but the oldest species in this lineage of dogs lives in Africa.

I would love to know the full story.

Canis cedazoensis is a creature lost to time. If we could see one, maybe we know some answers. Maybe we would see something very much like a black-backed jackal. Maybe it would answer some questions.

And it would probably raise more.

Yet more of the mystery to which we should humble ourselves.

It began with jackals, and in the Anthropocene, it may end with them as well. The coyote and Eurasian jackal have continued to spread their range. The coyote is from from Alaska and Newfoundland to Panama– on its way to Colombia. The Eurasian jackal (the “golden jackal,” as it is normally called) spreads north and west through Europe. Both are generalists of the jackal type.

Phenotypic plasticity and convergent evolution have played quite a game with this part of the dog family.

Science is always provisional, and often takes just one profound discovery to turn over the apple cart.

And oh, has it been turned!

America’s Favorite Veterinarian Contest halted due to cyber-bullying: Finalists to be honored collectively

Reported in AVMF NEWS, the following was announced:

“The 2015 America’s Favorite Veterinarian Contest has been halted, and we have declared all 20 finalists “America’s Favorite Veterinarians” following a vicious cyber-bullying attack which disrupted and contaminated the final election process. Activists opposed to cat declawing “hijacked” the contest, resorting to cyber-bullying the majority of the contest finalists. The attacks were reprehensible and undeserved, and have undermined the spirit of the competition and caused the contestants undue harm. Read the press release for more information.

“We thank you for your interest in the contest, and we are truly sorry for what has happened. Our contestants deserve the utmost respect for what they do every day as veterinarians. We ask that those who are bullying these contestants immediately stop. Please join us in honoring these veterinarians with the respect they deserve.” 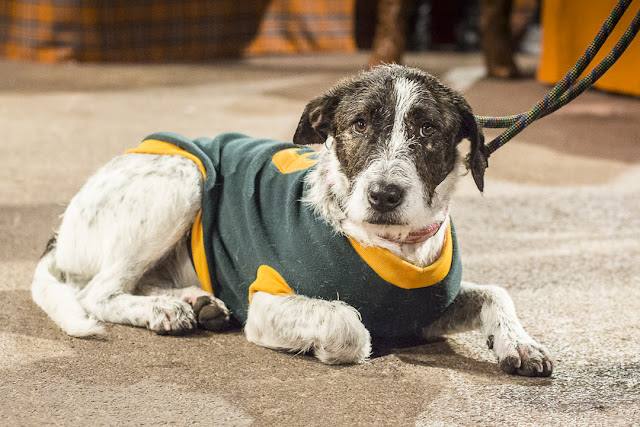 This photograph was taken one day after this lovely dog was given her new forever home. No wonder she is looking a little bewildered.
RIVIERA DOGS

Thanks for the comment and your ongoing work in Mi…

Thanks for the comment and your ongoing work in Miami, Michael. Helping landlords identify dog owners who are responsible and well versed in proper management would be a huge help to them when they have a pile of applications and no background in dog behavior, etc. I wonder though if basing rental decisions on evaluation results could turn out to be a double edged sword. As I'm sure you'd agree, a dog with behavior issues can be beautifully managed by a committed owner while a rock solid dog can be a jerk if his owner isn't conscientious. Have you thought of ways to circumvent that concern? I appreciate your feedback because I know you're in the thick of it!
BAD RAP Blog

The 2016 Summer Olympic Games are underway in Rio, and as sports fans cheer for athletes from around the globe as they go for the gold, devotees of dogs are applauding the ongoing efforts of 2014…

The Olympics: the best and worst of humanity

Are you ready for the dog days of summer? We’ve got a fun giveaway to help supply some beach reads AND one of our new PawZaar Have Paws will Travel tote bags! (And when the poolside reading…

Rosh Hashanah (Happy New Year) Wishes from a Furry Friend of Mine… Frankie! Wondering what your Jewish Pet Parents are celebrating? Here is a Rosh Hashanah “cheat sheet” written by Wendy Thomas Russell on PBS Newshour.

Date: The 1st and 2nd of the month of Tishrei in the Hebrew calendar. In 2015, the holiday starts at sunset Sept. 13 and ends at nightfall Sept. 15.

What it is: The Jewish New Year

Not to be confused with: Yom Kippur, which occurs 10 days later.

How important is it?: I asked my friend and former editor Jason Gewirtz. Here’s what he said: “Rosh Hashanah is a big, big deal. It’s the start of the Jewish new year. Yom Kippur the next week is only slightly bigger. [On a scale of 1 to 10], I’d say Rosh Hashanah is a 9.5 and Yom Kippur a 10. There’s nothing bigger than the two of them. They’re tied to each other. The period in between is supposed to be a time of mending any fences, if you will, and reflecting on things that can be improved from the previous year… It’s said that on Rosh Hashanah, you’ll either be written in or out of the Book of Life for the coming year. But on Yom Kippur, the book is sealed, meaning you’ve got that time in between to screw up or make your righteousness known.”

The good stuff: Foodwise, this holiday is associated with apples and honey (symbolizing a sweet new year), as well as pomegranates and challah (braided bread). Also, in lieu of stupid hats and tasseled squawkers, celebrants sport the traditional yarmulke and blow a cool-looking horn called a shofar.

Conveying meaning to kids: At dinner [a few years ago], I explained to my daughter that Rosh Hashanah, the Jewish New Year, is a time for reflecting on your life and challenging yourself to become a better human being. I served apples and pomegranates and asked Maxine to come up with one way that she might improve. Coincidentally, she had been reprimanded for “being silly” in her kindergarten class that morning, so her idea of self-improvement was to better follow her teacher’s instructions. I said my own resolution would be to spend less time looking at my phone. (Then on Yom Kippur, we checked in with each other about how well we did. The results? Well, a bit meh on both accounts. Luckily, we’re not religious…) As for children’s books, I recommend “Celebrate: A Book of Jewish Holidays” by Judi Gross and Bari Weissman.”    Read full story

May you be Inscribed in the Book of Life!

The yellow dog has become a ravening wolf

Nearly a year after her TTA, Miley is back in action. She’s 8 years old, but she runs and looks like she’s five.

In past week, she’s dispatched a full grown rabbit and this chipmunk.