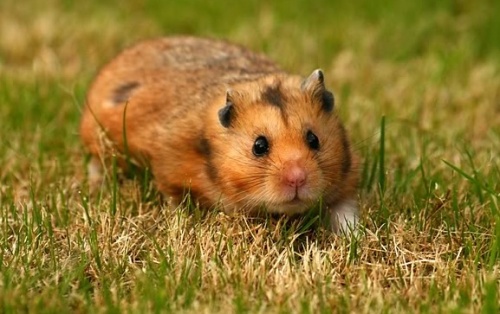 When I was eleven years old, I went hamster crazy.

At that age, I was a connoisseur of books on pets and wildlife, and I owned countless Barron’s books on pets. I had ones on all the common breeds of dog, including one on golden retrievers.  I discovered that the dog book were all written by Americans or by people living in America or writing for an American audience, and often, the books would just have enough filler about that particular breed, which would be followed by chapters that were essentially the same in every single book. Breed did not matter.

However, there were a few exceptions to this rule. Some books were really detailed and had fascinating narratives about the dogs they kept.  They were really good. The book on dachshunds by Leni Fiedelmeier was unbelievably good. The author actually told stories about her dogs as a way illustrating the best way to care for them.

I noticed very quickly that the book was a translation from German. The dogs all had German names, and most of the dachshunds in the photographs in the book were wire-haired, which is the least common variety in North America.

So it was a good book.

And that’s what brought me to hamsters.

The book on hamsters was by Otto von Frisch. I had no idea who that was, but years later, I learned that Otto was the son of the famous ethologist Karl von Frisch. He was a respected director at the Brunswick Natural History Museum, but he was a master naturalist. His descriptions of hamster behavior and natural history captured my imagination as nothing had before.

I knew that I had to have a golden hamster.

And not just any golden hamster.

Throughout the translation, every time the author mentioned the hamsters that possessed the original coat coloration, they were always referred to as “the wild type.”

That term captured my imagination, and I knew that I wanted to have a male golden hamster of the wild type.

When I went to the pet store to buy my first hamster, all that was available was a female black-eyed cream. She was  a nasty biter, and though I gave her the name of Linda, we always called her the Black-eyed Bitch.

I was given an ancient Teddy bear hamster soon after I got my first one, and then I bought a cinnamon and banded one. The banded one was wild-type, but only on her front and back.

It turned out that the cinnamon hamster was pregnant, and she gave birth a litter of ten. Nine of the babies were banded wild-types, which told me that the wild type was dominant, as were the bands. But one of the little ones was a true wild type without any banding at all.

I kept him, and he was my first male hamster. I came to prefer the males to the females. The males, although smaller, were pluckier and more confident. They matured more muscled up and svelte. I came to notice their scent glands on their hips, which they would rake along the sides of their enclosures. On a wild type male, these glands would stain their fur a bright yellow, almost like epaulets on their tawny sable forms.

They were tame in that they tolerated my presence and handling. As solitary animals, I doubt they ever gave me a passing glance. They were other beings, prisoners in our civilization that somehow adapted to our plastic “labyrinth” enclosures, water bottles, and exercise wheels.

My eleven-year-old mind could not comprehend that these animals were derived from a single litter captured in Syria in 1930.  I could not grasp the concept of how inbred these animals were. They were all derived from single litter– indeed a single male and single female from that litter– and that they had somehow survived that bottleneck and were available at virtually every pet shop for $ 5.00.

I did not anthropomorphize them. No, I did worse than that.  The animals I knew all around me were dogs, and I began to project upon them the essence of canines. I even tried to train them a few tricks, which they never learned.

If I owned a hamster now, I think I would have greater appreciation for them as hamsters. I would think of them hanging out in some of the most ancient fields of wheat, occasionally stealing a bit of the grain store for themselves or perhaps falling prey to those first domestic cats.

When I reread Frisch’s book on hamsters, I am able to appreciate this creature. It lived unknown to science until 1839, when a British zoologist first described a specimen of mid-sized hamster from what is now Syria. But they are creatures of the cultivated field, and they knew about our kind for thousands of years before we came to know them.

And yet they remain so distant.

As prisoners in a foreign land should be.