Friday Funny: One of these things is not like the others

The original caption when I found this was “do you think the cat knows he’s adopted?” I don’t know, they all have the same family characteristics, don’t you think? Probably a brother from another mother or a sister from another mister. Enjoy your weekend. Until next time, Good day, and good dog!

You gotta love a story with a happy ending. WBTW, Channel 13 in Myrtle Beach, recently brought us the story of Lalo, a Bloodhound who was instrumental in reuniting a family when the K-9 found a 9-year old who had wandered off to a friend’s house without telling anyone. Lalo’s partner, Deputy Timothy Davidson, says … END_OF_DOCUMENT_TOKEN_TO_BE_REPLACED

Your pets have your heart…furever. Celebrate that love with our FUREVER YOURS Bracelet Stack, exclusively available from our PawZaar gift store! The stack includes THREE adjustable stainless…

Yesterday, I picked up a young golden retriever puppy from European show bloodlines.  Her name is Aspen.

She is a natural retriever. She will already put that toy in my hand!

Yes. I said I’d never own one of these. I said the same thing about German shepherds.

And here we are.

How to Assemble Kuranda Dog Beds

We received a Kuranda bed for review. This post includes affiliate links. If you’ve ever visited an animal shelter, you’re no doubt familiar with Kuranda dog beds. These sturdy beds, with…

You cast a line into a trout stream. The water runs black and then spumy white around the riffles and rocks. The bait disappears below the surface. You know nothing about the bait. The stream-bed gravel or the submerged limbs can more easily catch the bait than a fish’s lips can. And that is often what happens, but you keep casting and casting. Maybe the bait will pass in just such a way as to draw the fish in for a little taste. And then you’ll catch him.

So goes the theory anyway.

The truth about writing a blog is that is so much like fishing a black-water trout stream. My prose goes out into the ether, passing through the search engines and Facebook shares, and usually no one clicks. No one nabs my bait. But sometimes they do bite, and they keep coming in for more.

In 2012, this blog was its height of popularity.  I had not monetized it yet, and I had time, back in those days, to throw out more writing than I ever could now. I honestly don’t know how I did it.

But maybe I do. In 2012, I was more cocksure, and I was so woefully ignorant that I thought I could be brave and speculate about things I didn’t understand.

I was 29 that year. It is amazing how much you think you know when you’re not yet 30, when you’re still wet behind the ears but still know enough to be interesting.

And I suppose that is the dilemma I now face.  I have changed my mind. I have grown. I am less sure of myself, not because i am more ignorant but because I know my limitations.

Writing in a forum such as this for as long as I have means that I can see the transformation. I can see the young idiot whose only real skill was in playing around with prose. Now, I sometimes feel that this is my only skill, and knowing what damage a clever phrase or cultivated meme can produce means that I take it way more easy than I used to.

Since I have matured, the readership has dwindled a bit. I don’t throw out my speculations as much as I used to, and much of my invective is toned down.

In the end, I know that my true muse will always be nature, and the animals will be my truest characters. I know that whatever I will write must have those features looming in it somewhere.

My writing for 2020 will better than it was eight years ago. It might not get as many hits, but it will be more mature and more reasoned.

New adventures lie before me. I can feel their pull in this oddly instinctual way, but they are coming. New chapters in my life are about to be written. What’s past is prologue. The rest is still unwritten but coming into view. Through the haze of existence, I can see what lies ahead.

But I cast my line into to the stream. Maybe I’ll get a nibble or two.

Why do coyote females have larger litters in heavily hunted areas?

I have a lot of quibbles with Dan Flores’s book, Coyote America. Among them is a contention that coyotes howl because it allows them to “take a census.”  If no other coyotes howl back, the females wind up releasing more ova and having larger litters. This description, which Flores calls an “autogenic trait,” cannot be found anywhere in the coyote literature. His account is not described in the book, but it is mentioned in his interview with National Geographic and on The Joe Rogan Experience.

I have no idea where Flores got this idea, but it’s not really what happens. The literature on why coyotes have larger litters in areas where they have been heavily hunted says that the larger litter sizes are associated with better access to food resources. The best-known paper on this issue comes from Eric Gese, a researcher with the USDA, who studied coyote population dynamics in an area of Colorado.

Gese contends that what happens with coyotes in pressured areas is that the surviving females are healthier, simply because they have access to more food resources. This greater health causes them to release more ova during the estrus cycle, and this increase in ova results in greater litter sizes.

It is not because the coyotes are taking census and can somehow magically figure out that they should produce more young.  It is simply that the coyote females’ own bodies respond to greater food resources by becoming more fertile.

What has possibly evolved in coyotes is that they have a tendency to become significantly more fertile when the females are at their most healthy. This is a great trait for a mesopredator to have.

After all, coyotes evolved in North America with dire wolves and a host of large cats breathing down their necks. Natural selection favored those that could reproduce quickly if populations were dropped dramatically.

But it’s not because of some “autogenic trait.” It is simply how coyote populations expand as mesopredators with increased or decreased access to prey.

So yeah, my take on Coyote America is that it is mostly a science fiction book. Not only does he mess up the exact genetic difference between a wolf and a coyote, which is not equivalent to the genetic difference between a human and an orangutan (as he claims),  he also messes up that coyotes really do hunt down and kill cats and eat them. They are not just killing a competitor. They are using cats as a food resource.

This was a book I was so looking forward to reading. It got good press, but the actual science in it was so lacking.

This giveaway is sponsored by and fulfilled by GROOM Bathing Tablets. Winter weather is in full swing now–and we all know what that means: itchy skin and soggy paws. Just like our skin dries… 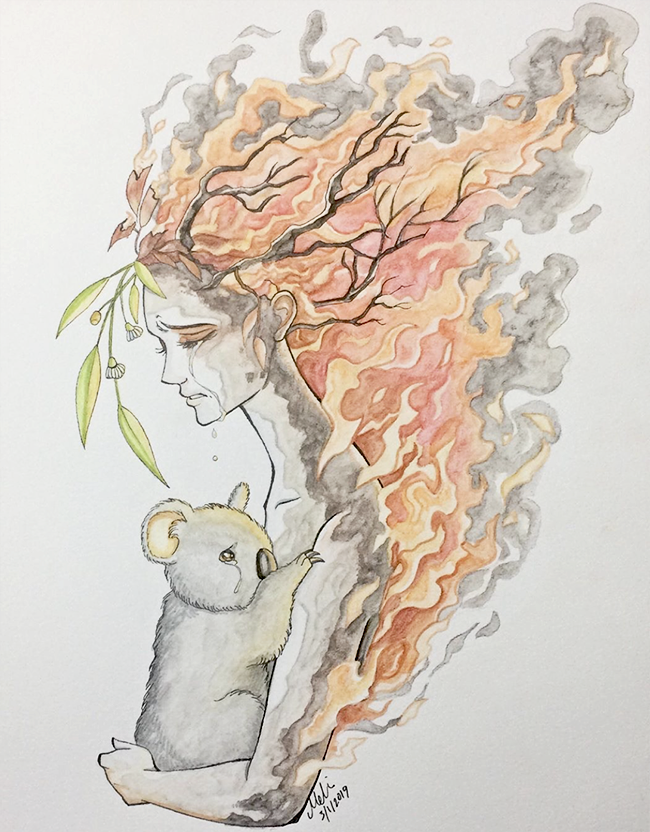 Australia hold a special place in my heart. I have been incredibly fortunate to have traveled to 14 different countries over the years, and I can genuinely say each one has touched me on some level. But in 2010, after spending a few weeks in Sydney, Brisbane, Byron Bay, Cairns, and Palm Cove on a trip to Australia I took with the band for whom my husband works, I’d found my place. From snorkeling the Great Barrier Reef to riding high over the canopy of the rain forest to hanging out at a koala rescue sanctuary to visiting a tea tree oil plantation to chilling at one of the best music festivals I’ve ever attended, our visit to Australia was hands down the best trip of my life. Whenever someone asks where I’d choose to live if it could be anywhere in the world, Byron Bay is my immediate answer. I love Australia. So, so much.

But even if I’d never had the chance to step foot there, it would be impossible not to feel heartache for the victims of the devastating fires going on. I haven’t been able stop thinking about it (and there have been several episodes of me bursting into tears because I’ve felt so helpless). I know most of you can relate. I felt like it would be wrong to post anything else on here until I addressed what was happening and did some research on ways to help. Here are 7 ways I’ve found that we can all do something to make a difference.

1. The Australian Red Cross is accepting donations to its Disaster Relief and Recovery Fund. This fund has helped send volunteers and staff communities affected by the fires, and has also helped give support to displaced people, along with emergency grants to help people with immediate needs.

3. The World Wildlife Fund (WWF) is also accepting donations toward their relief efforts in New South Wales. When the bushfires clear, the WWF will work to restore homes and care for injured wildlife.

4. The Australian organization GIVIT matches donated goods with items that specifically requested by victims of the fires. Learn more and give right here.

5. Save the Children is accepting donations to build special spaces where kids affected by the bushfires can play and discuss their experiences in a supportive environment while their parents work on rebuilding and recovering from their losses.

7. The nonprofit Koalas in Care Inc. normally helps approximately 65 koalas every year, but is taking in many more koalas as a result of the bushfires. Donate here.

One final thing before I go… I don’t discuss politics much here, but guys, climate change is real. The end. The fires happening in Australia are just one of countless incredibly serious consequences of damage that humans have done. Please, for the future of our planet, vow in 2020 to make changes – whether big or small – in your daily life that keep the earth in mind. And most importantly, vote with the planet in mind. We’re talking about our home, which is in desperate need of repair before it’s too late.